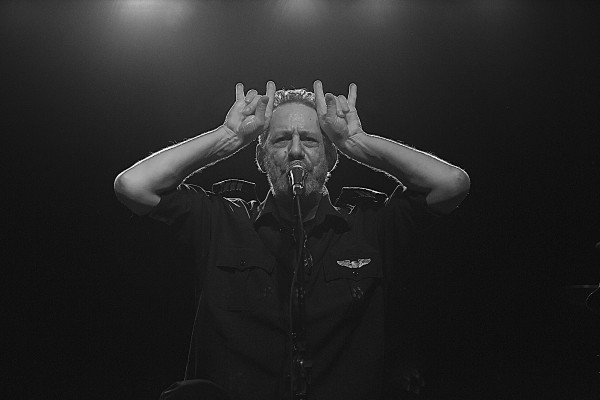 It was here that Pisapia reacquainted himself with club owner Lisa Zbitnew, who had played an important role in signing the original Box to Alert Records in 1983 and had worked tirelessly to break the band in Canada. Earlier in the day, Pisapia spent an hour being interviewed by iconic deejay David Marsden whose CFNY station had done so much to break The Box’s early hits. At other ports of call like Boom-FM and Sirius Radio, Pisapia reminded his hosts that although the band enjoyed great success with hits like “Closer Together” and “Ordinary People”, the Box en

joyed a string of hits during the mid-eighties. The band’s task now was to convince a healthy Phoenix turnout that The Box is still a viable live act. A task they set about with all the polish and professionalism of a band that has been honing its skills for 10 years yet at the same time delivering lyrical messages that are as poignant today as they were when they were first recorded.

Launching into `Must I Always Remember’ from their self-titled debut record, the band instantly hit a chord of familiarity with a receptive audience, a vibe that was continued with `Carry On’ from their “Pleasure And Pain” release that drew the crowd into a spirited sing-along of the song’s infectious chorus. Pisapia then asked for the crowd’s patience as the band indulged in three tracks off their “John Of Mark” record; “That’s The World”, the haunting “So Beautiful” and “Hell On Earth” which projected the band’s initial progressive rock roots with keyboardist Guillame Jodoin anchoring arrangements which allowed guitarist Francois Bruneau and bassist Dan Volj a chance to exhibit their instrumental chops.

Returning to more familiar territory with `Inside My Heart’ from “The Pleasure And The Pain” release and their very first single “Walk Away”, The Box were now clearly winning their audience over. A stunning, theatrical rendition of `Temptation’ again showed off the band’s instrumental prowess, `Crying Out Loud For Love and `My Dreams Of You’ engaged the audience vocally but it was the intro to `Ordinary People`, the second big hit off “Closer Together” which really stoked up their audience. Pisapia, evoked humour by messing up the intro, causing a false start, but with aid from support vocalist Isabelle Lemay, Pisapia got the song back on track and their set hit full party mode as the band unveiled their new song `Life Is A Party’, sparked another sing-along on `L’Affair Dumoutier (Say To Me) and then built the set to a climax with the band’s cover of Men Without Hats’ `Safety Dance’ (Pisapia was in the original band) and then closed the set with the band’s classic `Closer Together’ before wrapping up the show with a two-song encore featuring `Stardust Hotel’ from the “John Of Mark” album and “Checkmate” from their album debut”

Jean Marc Pisapia is a consummate front man, with not only solid vocal chops but also a magnetic personality, bouncing around the stage and engaging a reaction from his audience. His band is super tight with Lemay adding strong vocal support over the instrumental contributions of Volj, Bruneau, Jordoin and Lapierre. But just as important, the band’s lyrics are as meaningful as ever with `Ordinary People ‘and `Closer Together’ being just as relevant today as they were when first released.

With the promise of even more new material in future months, The Box is a band out to prove they are just as poignant as ever. The crowd reaction generated by their three-date swing of Ontario, which also included Burlington’s Boston Manor and Ottawa’s Brass Monkey venues, suggests The Box are off to a great start.